• Like the original, it can be bought with a wash-down interior and a folding fabric roof, for those on safari

• The Defender is also aimed at trendy customers, with the option of huge 22-inch wheels and urban features

Land Rover has officially launched its 21st century successor to the iconic 71-year-old Defender 4X4 – the quintessential British off-roader loved by millions, including Her Royal Highness the Queen.

The new Defender is built to be tough enough to tackle any adventure at home or abroad - from Sandringham, to the school run, to the Serengeti.

Unveiled on Tuesday morning at the Frankfurt Motor Show following a stream of high-profile leaks, the hi-tech and hardcore off-roader is the modern day successor to the original rufty-tufty 1948 Land Rover, but ‘reimagined for the 21st century’.

That means it will be ideal for the impenetrable jungles in Africa and Asia, but also just as capable when it comes to navigating the trendy urban jungle of London’s Shoreditch, or collecting a family takeaway in the Shires - with the help of six curry hooks.

Land Rover describes the new Defender - which has been proved to be one of the car industry's recent worst kept secrets following a string of image leaks - as ‘expedition ready’ and ‘fun without the flaws’ of the ageing original. 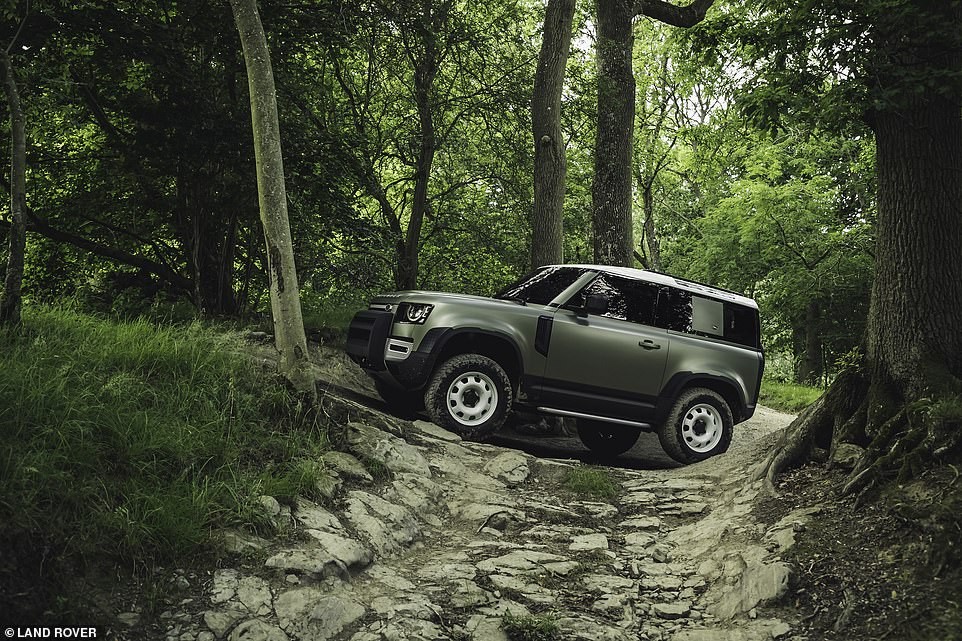 But although the new incarnation of the British icon has been designed and engineered in the UK, the new Defender will be built abroad - at Jaguar Land Rover’s massive new factory at Nitra, in Slovakia, giving the firm a foothold within the EU if, as planned, the UK leaves following the growing Brexit row.

It can paddle through rivers and streams to a depth of up to 900mm, aided by the car maker's first electronic wade programme that's been tested to the extreme.

In fact, the new Defender has been subject to 62,000 different tests over 744,000 miles in some of the world’s harshest climates from 50-degree desert heat to minus 40 degree Baltic conditions to ensure it is ready to take the iconic mantle.

Ground clearance of up to 291mm means it can tackle steep angles easier – downhill and uphill. 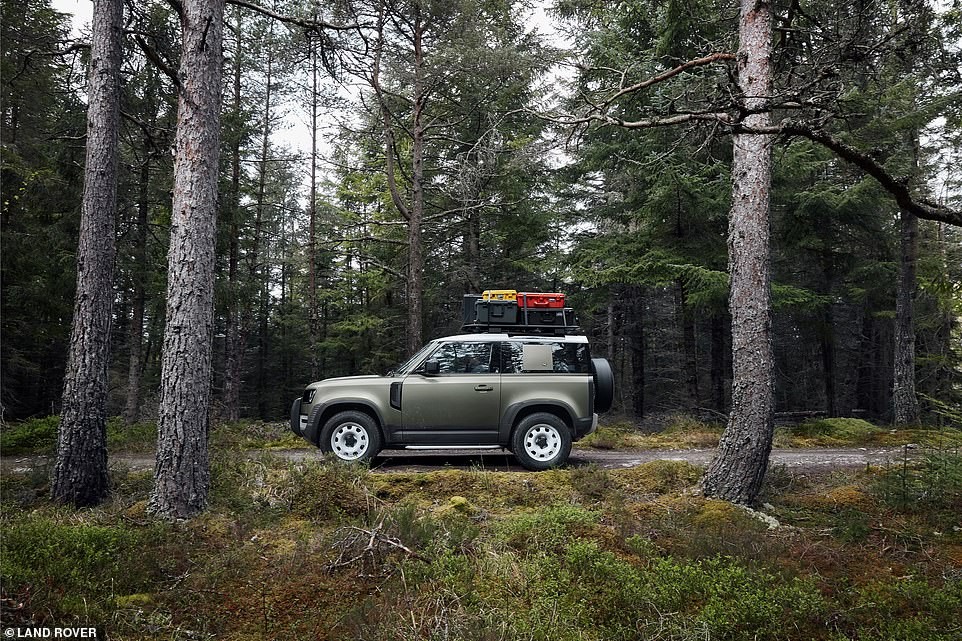 But it also includes hi-tech features including the ‘X-ray vision’ mode first seen in the new Range Rover Evoque.

This uses exterior cameras to allow drivers to see on the central touchscreen what’s under the vehicle, plus a digital rear mirror - also using cameras - to give motorists a clear view behind unimpeded by passengers.

A new generation infotainment system can connect two smartphones at the same time and the wi-fi connected car is 5G future-proofed by allowing software updates to be downloaded over the air. It can even handle satellite phones, just in case you are taking your Defender into remote areas.

Its practical contemporary interior means it’s also perfectly suited for the school run and shopping trips and can tow trailers up to 3,500kg.

And you don’t need to be an expert explorer like Bear Grylls to enjoy the new Defender. 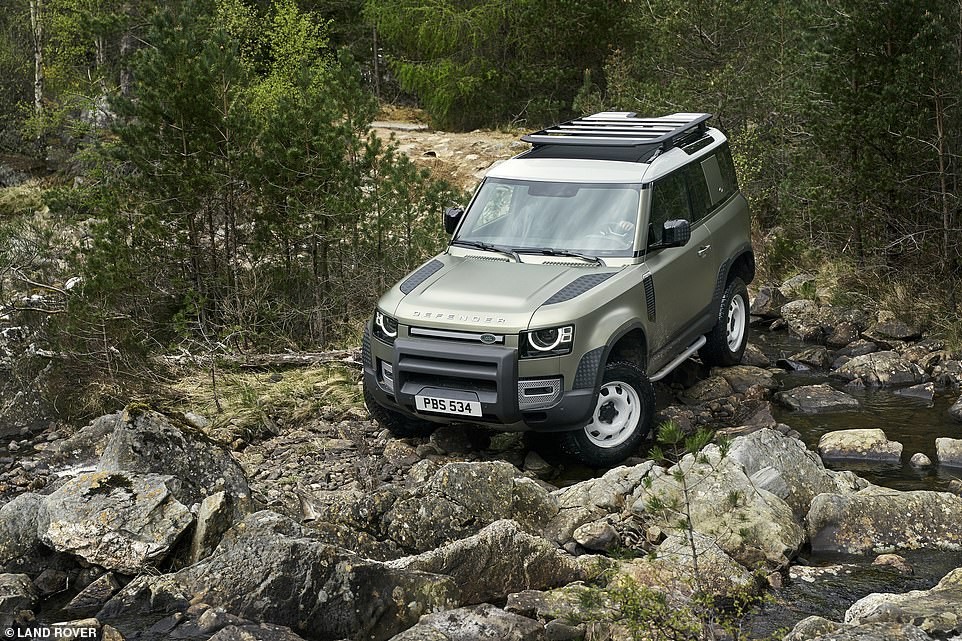 The vehicle’s pioneering 'terrain response' system means that experienced off-road drivers can choose the setting they want want for the ground being covered – such as ruts, mud, sand, rock or snow - while novices can simply put it into automatic and let it do it do the work for them.

Land Rover said the new Defender ‘raises the threshold for both off-road ruggedness and on road comfort’ offering ‘first class long-haul comfort’ across any terrain and noting: ‘It can negotiate crowded city streets as effortlessly as climbing mountains, crossing deserts and withstanding freezing temperatures.’

A commercial van Defender will also be available, priced from £35,000 plus VAT. 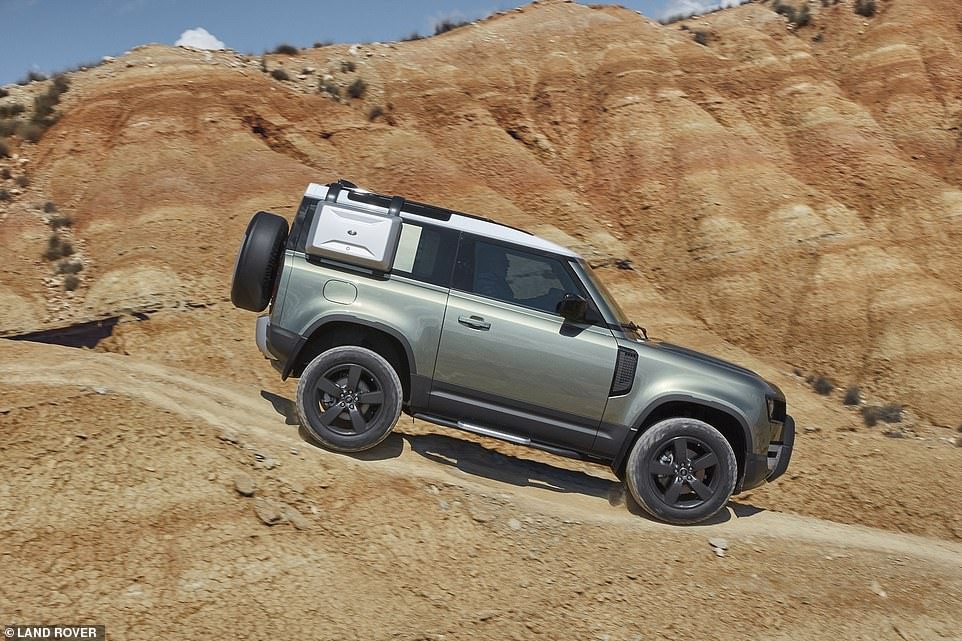 Although a brand new vehicle, the new Defender has many styling and practical cues which hark right back to the original of 71 years ago, updated for modern lifestyles.

Inside, structural elements usually hidden from view have been exposed to emphasise its industrial nature and simplicity.

The first back-to basics utilitarian Land Rovers – for use as agricultural workhorses - were designed to be easily cleaned and hosed out, and the next-generation Defender has continued these traits.

The modern version has durable rubberised flooring allowing the interior to be easily cleaned with a brush or a wipe. And a portable rinse-system to washout mud is also available.

A central 'jump' seat – like the one available in the original - gives the option of having three seats up front.

It means the smaller Defender 90 can have up to six seats, while the larger four-door 110 can be specified as a five, six or seven-seater.

Also reflecting the design of the original are the tread-plates on the bonnet and the side-hinged rear tailgate and the option to have the spare wheel on the back.

What is new is the ‘alpine lights’ options, which are small windows near the roof that allow in the light but also let passengers to look up at mountains...or the city high-rises.

An optional folding fabric roof - also echoing the original Defender - gives an open-top feel and allows passengers in the second row of the 110 to stand up when parked to provide the full safari experience.

Gloss white steel rimmed wheels echo those on early Land Rovers for the most basic version available and there will even be side-saddle storage panniers built into the side windows on some models. 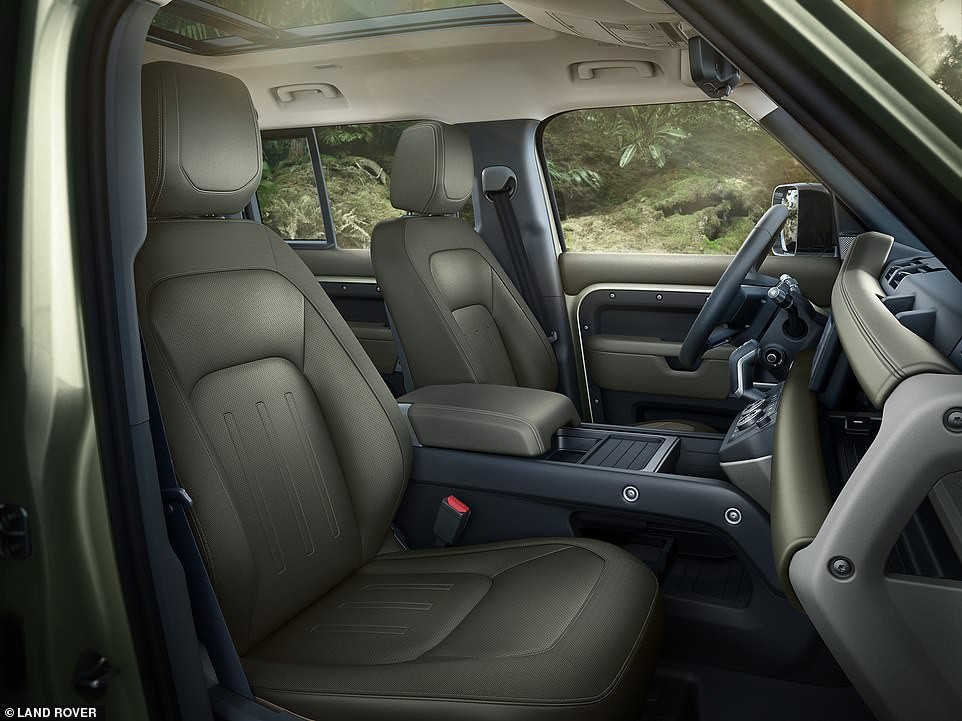 But the Defender is not all about extreme outings.

For modern families needing somewhere to hang their takeaways safely when driving home, there is not one but SIX curry hooks and storage space for a couple of two-litre bottles of water - or wheatgrass juice if you're a hipster.

There are lots of accessory packages geared for every eventuality, too - readying you for the rainforests of Kuala Lumpar or the red carpets of Knightsbridge.

The main packs are: Explorer, Adventure, Country and Urban - you can work out who each one is aimed at.

The most hardened customers looking to make the most of the Defender ownership can customise their SUV with an electric winch, a roof-top tent (taking up to 300kg of weight, which is around four medium-sized adults), a roof rack platform plus the specially designed extendable ladder on the side to get you up there, tow-bar, inflatable waterproof awning, and bespoke air-intake snorkel. 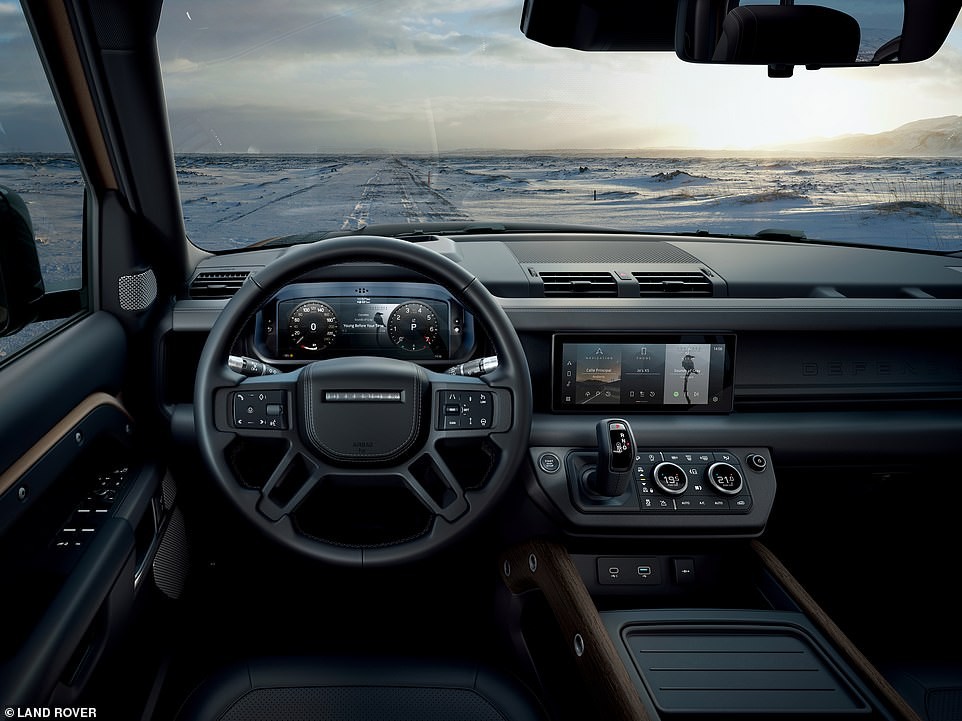 Those who want to get their 4X4s muddy and dirty – without spoiling or scratching the original paintwork – can have a factory-fitted special protective satin film wrap over the bodywork in seven shades, such as Pangea Green, Indus Silver and Gondwana Stone, which can be removed later if desired.

A panoramic glass roof is another optional feature.

But Land Rover thinks the smaller three-door Defender 90 will be particularly popular with young urban fashion-conscious customers – and has created personalisation kits and big 22-inch wheels to add edgy bling to the mix.

Both the Defender 90 and 110 have four engine variants at launch: a 2.0 litre direct injection 4-cylinder inline diesel with either 200HP or 240HP; a 2.0 litre 4-cylinder inline petrol (300HP); or a new straight six-cylinder 3.0 litre petrol (400HP) with mild electric hybrid. All are linked to an eight-speed automatic gear-box with permanent all-wheel drive. The diesels promise fuel economy of up to 37.2mpg with CO2 emissions of 199g/km.

A plug-in hybrid (PHEV) version is to follow next year, allowing the vehicle to run for periods in electric-only mode.

Land Rover said the new Defender had been ‘engineered with capability and safety for all the family'.

State of the art ‘cyber security’ is also pledged to deter thieves.

‘We have also been obsessed about its off-road capability and about its practicality.. But it must also have agility on the road as well. It has. Its manners on the road are stunning.’

Chief designer Gerry McGovern added: ’The new Defender is respectful of its past but is not harnessed by it. This is a new Defender for a new age.’