Southend were unable to build on Saturday’s point against Fleetwood as they suffered a 4-3 defeat against Shrewsbury Town at the Montgomery Waters Meadow.

A bright start from the home side was rewarded when Ethan Ebanks-Landell’s low cross was turned in at the near-post by Omar Beckles to give Shrewsbury the lead.

That advantage was then doubled when Jason Cummings curled one into the back of the net off the inside of the post before Blues got one back through a Stephen McLaughlin header.

Ollie Norburn would restore Shrewsbury’s two-goal advantage after the break only for Stephen Humphrys to grab his fifth goal of the season to give the visitors hope of snatching a point.

But any hope Blues had was all but extinguished when Callum Lang added a fourth to wrap up the points for the home side although a screamer from Simon Cox in injury time made for a nervy finish.

Following the weekend’s draw with Fleetwood, Southend had travelled to Shrewsbury in good spirits as they looked to build on their first point of the campaign.

Shrewsbury though have enjoyed playing Southend in recent years, with the Salop winning their last five meetings against Blues, and they got off to a lively start as the sun set in Shropshire.

Inside the first minute, Ryan Giles broke through the Southend defences and forced a save out of Mark Oxley, with Jason Cummings stinging the palms of the Blues number one moments later.

And the home side’s positive start got its reward midway through the first-half as Shrewsbury took the lead through a smartly taken goal by Omar Beckles.

Ethan Ebanks-Landell won a 50-50 with Brandon Goodship on the right-hand touchline before whipping a low ball into the area which was stabbed home at the near-post by Beckles.

The goal had been coming and the Salop went close to doubling their advantage when Giles again got in a shooting position, this time beating Oxley but not the woodwork as he struck the post.

Shrewsbury though would increase their lead shortly after when Cummings cut onto his left foot inside the penalty area before curling the ball beyond the dive of Oxley and in off the far-post. 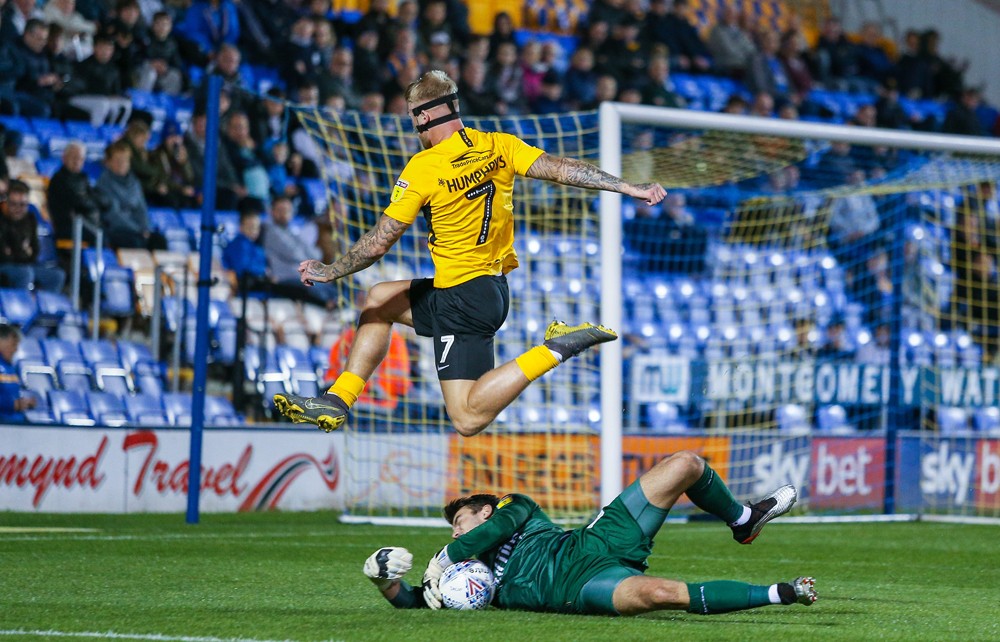 Southend looked like they’d been blown away by a resurgent Shrewsbury, but they immediately got themselves back into the contest with Stephen McLaughlin grabbing his second goal in two games.

Elvis Bwomono’s cross picked to the far-post pick out the Irishman who evaded the attentions of Donald Love to loop his header over Max O’Leary and quickly peg the home side back to one.

McLaughlin’s strike had given Blues a little bit of the impetus going into the break and the winger was quickly causing Shrewsbury problems again with a low drive that needed saving by O’Leary.

In Saturday’s 3-3 draw with Fleetwood, Blues had to come from 2-1 down at the interval to claim their first point of the season and Southend came out hopeful of repeating that trick here.

And while the deficit was only one, Blues were in with a shout but Oxley was soon picking the ball out of his net for a third time as Shrewsbury restored their two-goal advantage.

A superb mazy run from substitute Shaun Whalley put the midfielder into a position to pick out Ollie Norburn with a low ball, leaving the Salop captain to stroke the ball into the back of the net.

With their two-goal lead restored it looked like Southend were out for the count but Blues picked themselves back up off the canvas again with Humphrys grabbing one back.

Goodship found space on the right before cutting the ball back to Humphrys who took a touch before firing past the unsighted O’Leary to put Southend back within touching distance once more.

But any hope that goal had given Blues looked to have faded when Shrewsbury once again went two goals in front, grabbing a fourth with Callum Lang sliding the ball under Oxley.

And although Simon Cox would make it a nervy finish with a brilliant 20-yard strike that crashed into the top corner in injury time, it unfortunately came too late for Blues to avoid defeat.