POINTS AND PROGRESS FOR BLUNDELL AT SILVERSTONE

Mark Blundell enjoyed a long-awaited return to the points-paying positions as he showed further signs of progress at the penultimate weekend of his debut British Touring Car Championship campaign. With changeable conditions the order of the day, the former 24 Hour of Le Mans winner made the most of the rain picking up a P13 finish in the final race of the day to underline his recent improvements.

Heading into the weekend after a positive display a fortnight prior at Knockhill, Blundell made his return to Silverstone after a 16-year hiatus. Although enjoying plenty of visits to the home of British Motorsport through the years, this weekend marked the former Formula One driver’s first competitive taste of the National Circuit.

Unfortunately, the weekend would not get off to the most positive of starts as a fuel valve issue cut short the #8 HP car’s first outing of the weekend. Searching for the correct setup in the day’s second free practice session, the former Formula One driver had to settle for a P24 finish thanks to posting a 58.159 lap time - just under four-tenths behind his race-winning Trade Price Cars Racing teammate, Jake Hill.

Still yet to be satisfied by a qualifying session this season, Blundell went out on Saturday afternoon striving to claim a starting position that he could build upon the following day. Ultimately though, Blundell was left frustrated as he found himself in P28 at the end of the session, with work to do to end the weekend in positive mood.

As race day rolled around at one of the showpiece events of the season, Blundell’s weekend would get worse before it got better! Demonstrating his best lap times of the round so far, Blundell’s race one progress was curtailed as he was collected by an incident that played out in front of him which left the Audi S3 driver with nowhere to go. The damage was enough to end his race early, marking his first DNF since Snetterton.

Lining up from P29 for the day’s second race, Blundell got off to a great start making up several positions on the opening lap but was forced to make his way through once more after he was forced wide at turn six just a lap later. Picking his battles wisely, the former Formula One driver demonstrated his ability in the wet picking up places routinely as the rain began to fall more steadily. With conditions worsening the red flag was waved as the race was brought to an early conclusion. By this point, Blundell had made his way through into the top-twenty and claimed a P18 finish. 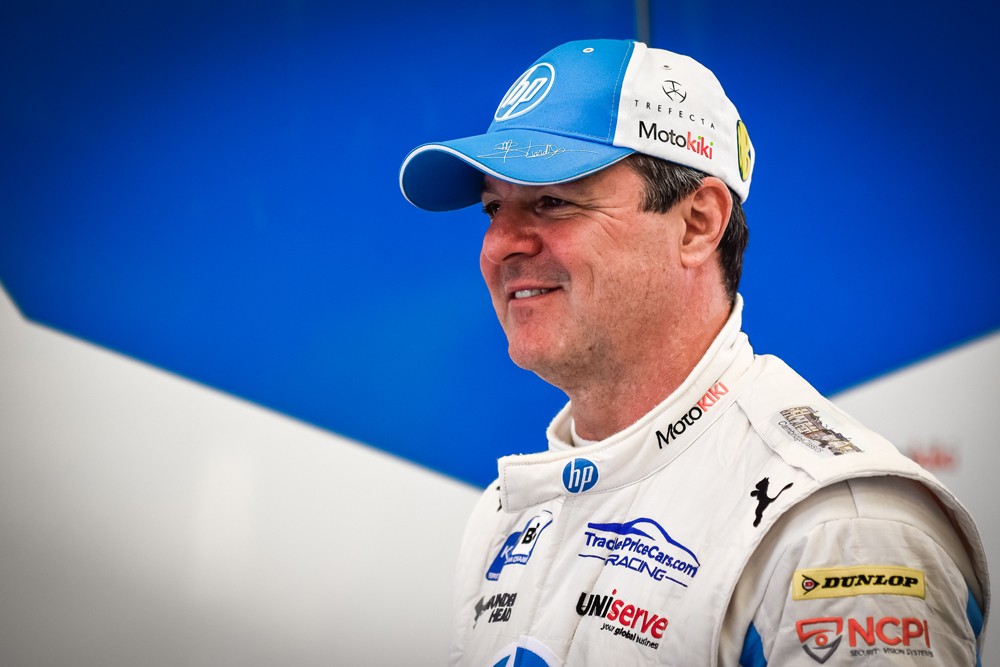 As the final race of the day approached, the changeable conditions continued to wreak havoc with the team’s strategies. Like most on the grid, Blundell and his Trade Price Cars Racing team opted for slicks ahead of the final race of the weekend. Getting off the line well, Blundell was once again tasked with making his way back through the order after contact on the rear at turn two on the opening lap sent him to the back of the grid.

With rain beginning to fall harder, Blundell and his team made the decision to be one of the first to dive into the pits to change to wet tyres, a decision which was replicated by the majority of the grid over the next couple of laps. As conditions worsened, Blundell once again demonstrated his ability in the wet making excellent progress through the order. Breaking into the top-twenty with half the race’s distance remaining, the Trade Price Cars Racing driver’s sights were firmly set on collecting his second points-position finish of the season.

In the thick of the battle for the remainder of the race, a number of brave moves in light of the conditions helped Blundell make his way into the top half of the order, collecting an overdue finish in the points as he crossed the line in P13.

“It feels like we did things the hard way this weekend but it is a bit of a relief to be leaving with some more points under our belts and a positive showing on track. Technically, I finally feel like I am starting to get my head around the things that are needed to extract more out of the car and that has been a big effort to tune myself out of thirty years worth of habits.”??“I have had some good memories through the years at Silverstone and I have to admit that a Touring Car weekend here is a little different! That said, it has been a really positive one. We’ve shown some strong progress on the track and we’ve had a huge number of partners, friends and family trackside. To just give them a little bit of payback for all their support feels great and let’s hope we can end the year on a high at Brands in two week’s time.”

The curtain falls on Blundell’s debut British Touring Car Campaign as the series heads back to Brands Hatch for the season finale on the 12th and 13th of October.