First of 25 replica Goldfinger Aston Martin DB5s worth £3.3million has been built – complete with Bond's bulletproof shield, revolving number plates and fake machine guns (but you WON’T be able to drive it on public roads)

• 'Job1' - the first of 25 cars being produced for customers - has been completed - and we've had the first look
• Each one comes with a £3.3million price-tag - which is 790 times more than the original cost in 1963
• A quarter of the Goldfinger DB5 Continuation Cars are unsold, meaning you can still order one today
• The new cars, with some of the working MI6 Q-Branch gadgets, each take 4,500 hours to hand- build
• Each will have battering rams front and rear, a rear smoke screen, oil slick system and a removable passenger seat roof panel to suggest an ejector seat exit 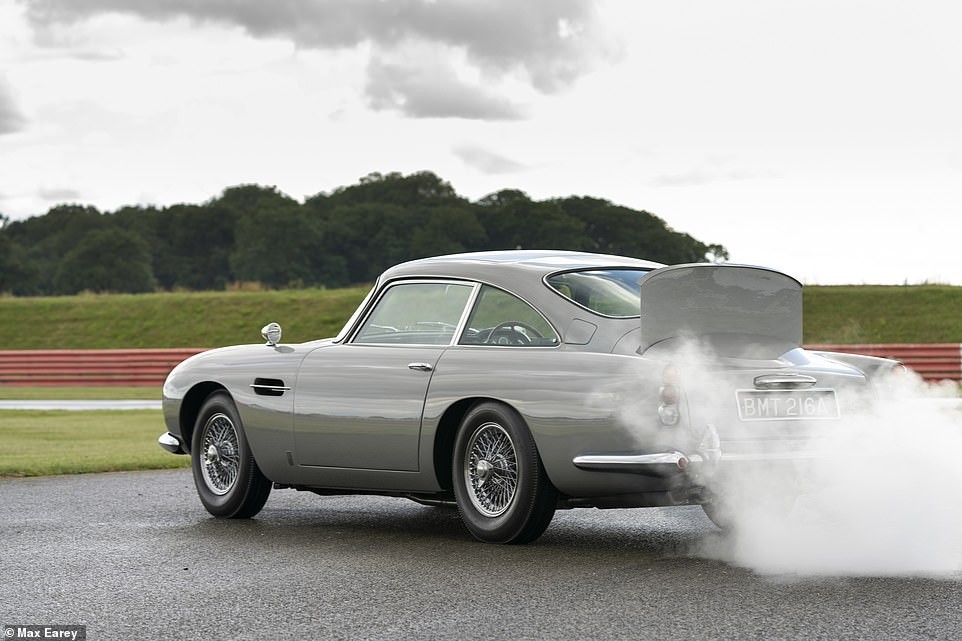 The gadget-laden Aston Martin DB5, which made its big-screen debut driven by 007 star Sir Sean Connery in the 1964 James Bond movie Goldfinger, has been reborn in the 21st century after a gap of more than half a century.

Arguably the most famous Aston Martin ever - and possibly the most recognisable car in the world - it has entertained millions of fans and generations of children who have played with their own treasured toy versions.

Now some 55 years after the last DB5 was built, the very first in an exclusive limited customer run of just 25 brand-new hand-crafted classic DB5 Goldfinger Continuation cars has rolled off the production line – complete with most of the working gadgets that made it famous. And we've had exclusive access to the collectible machine.

The inaugural ‘Job 1’ car – not to be confused with the lethally steel-hatted Goldfinger henchman, Oddjob – comes with a £3.3million price-tag, which is 790 times more than the original cost.

First deliveries to well-heeled customers and collectors begin from this week and continue for the rest of the year up to someone’s extra-special Christmas.

The good news for those with the wherewithal is that with three-quarters of the limited production run of 25 now sold, there is still a chance to buy one.

Its blazing machine guns, revolving number plate, tyre-slasher wheels, emerging bullet-proof shield and – most memorable of all – the passenger ejector seat, made the 007 DB5 a legendary vehicle in the Swinging Sixties and beyond.

Toy firm Corgi’s version was a favourite of children – and of collectors today – though the gun-toting villain ejected through the roof was forever getting lost. 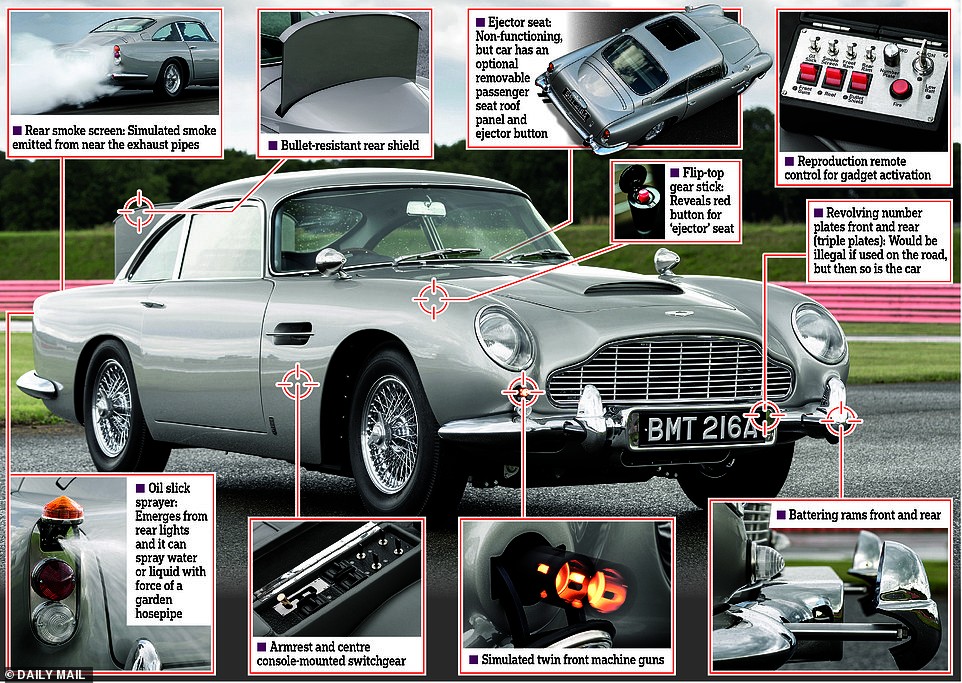 The new cars, with some of the working MI6 Q-Branch gadgets, each take 4,500 hours to hand- build, under strict social distancing and safety measures prompted by the coronavirus pandemic.

With brutal timing, the first finished continuation car arrives just two months after the company’s boss of six years, Dr Andy Palmer, who signed off the project, was himself unceremoniously dispatched via the corporate ejector seat in a boardroom purge.

The working Goldfinger gadgets were specially recreated by Aston Martin engineers and Oscar-winning special effects guru Chris Corbould, who has worked on more than a dozen Bond films.

But to the disappointment of many, a fully functioning ejector seat proved just too much for the health and safety minders. The nearest nod to it is a removable passenger seat roof panel. Machine guns will be ‘design features’ rather than working weapons and the tyre slashers don’t extend on the continuation car for safety reasons.

As it’s not legal to drive on the road, it is being aimed directly at wealthy collectors and enthusiasts who will be constrained to driving it on private land and tracks.

Aston Martin said it is ‘the first in a strictly limited run of 25 customer cars’ recreating ‘the most famous car in the world’ in association with EON Productions, makers of the James Bond films. 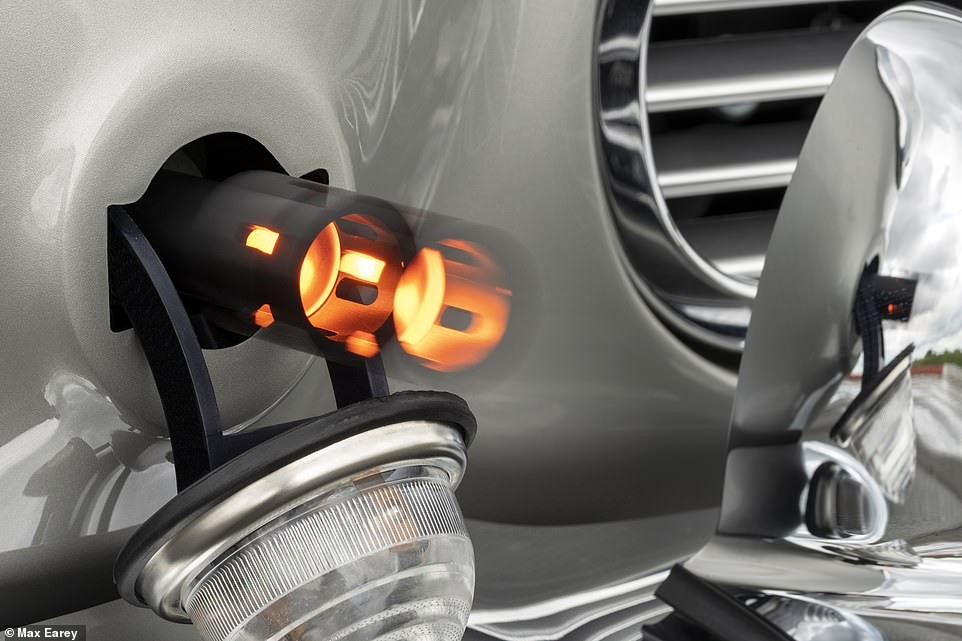 The iconic British car brand said: ‘Scores of the UK’s most talented craftspeople and engineers put the finishing touches to the first in a new but very familiar series of Aston Martin sports cars, as the first customer car in the DB5 Goldfinger Continuation programme left the production line.’

It added: ’The ‘Job 1’ DB5 represents not only another significant design and engineering success, but also becomes the first new DB5 to be built by Aston Martin in more than half a century.’

Gadgets inside the car comprise: a secret weapons and storage tray under the seat; a simulated radar screen tracker map; telephone in driver’s door; flip-top gear knob actuator button (for a notional ejector seat); an armrest and centre console hiding gadget switches; and a remote-control to activate gadgets.

The structure of the reborn cars is aluminium exterior body panels wrapped around an authentic DB5 mild steel chassis.

The cars are powered by a 290bhp 4.0-litre naturally aspirated inline six-cylinder engine, linked to a five-speed manual gearbox.

Aston Martin said: ‘By far the most famous of the original owners is the world’s best-known secret agent – James Bond – who first drove the car that is today inextricably linked with him in the 1964 film, Goldfinger.’ 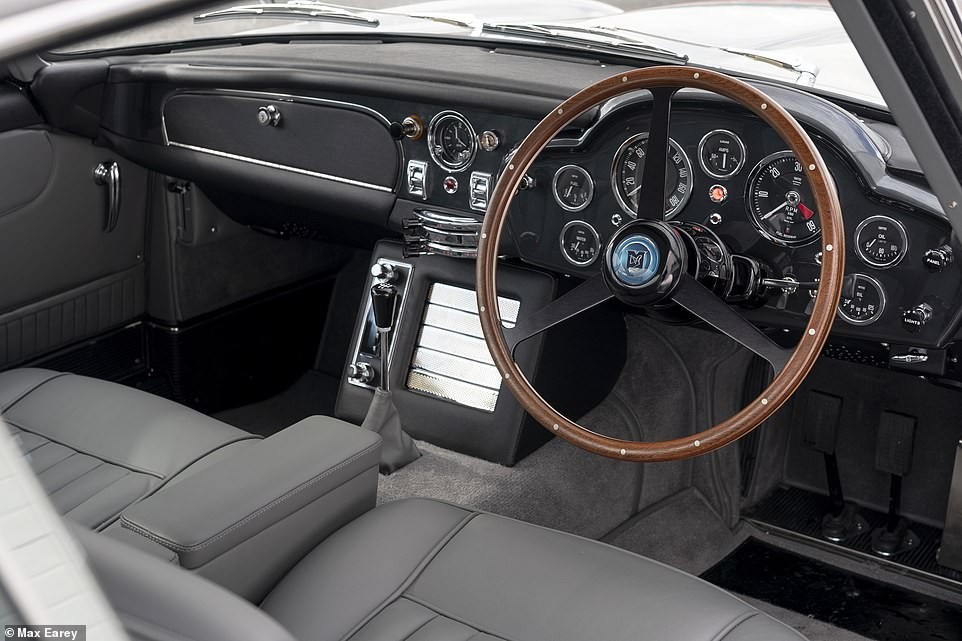 ‘Created in association with the producers of the James Bond films, EON Productions, and featuring a broad suite of working gadgets first seen on screen in the 1964 film, the Aston Martin DB5 Goldfinger Continuation cars are history in the making. ‘

It is the latest project of Aston’s Continuation car programme, which began in 2017 with the DB4 GT Continuation.

The firm said: ‘The new DB5 models represent among the most valuable new cars yet brought to market by the British luxury brand. Each DB5 Goldfinger continuation car is priced at £2.75m, plus taxes.’

It added: ‘All the new cars are meticulously detailed authentic reproductions of the DB5 seen on screen, with some sympathetic modifications and enhancements to ensure the highest levels of build quality and reliability.

After the DB5 appeared in Goldfinger in 1964, it created such a sensation that Corgi brought out a toy version the following year. Complete with ejector seat, machine guns and bullet-proof shield, and available in gold or silver, 2.5million were sold. In 2018 Lego launched a 1,290-piece version, costing £129.99.

The DB5 has featured in six subsequent 007 films – Thunderball, GoldenEye, Tomorrow Never Dies, Casino Royale, Skyfall and Spectre. It is set to make another appearance in the next movie ‘No Time to Die’, delayed from Spring due to the global hold-up caused by Covid-19.

There are plans for three more cars in addition to the 25 for customers: one for Bond movie makers EON Productions, one to remain with Aston Martin and a third to be auctioned for charity. 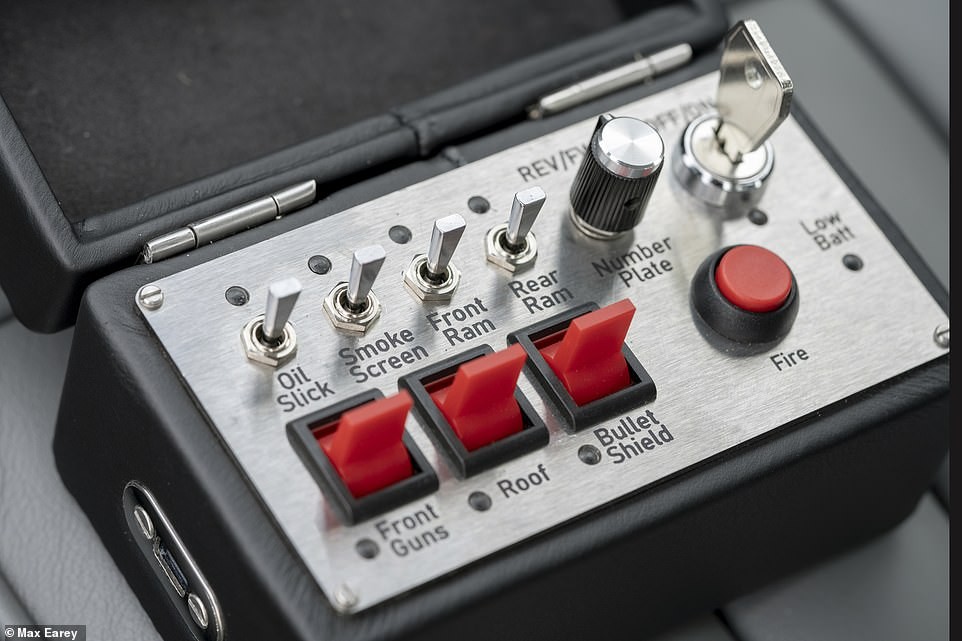 However Aston Martin stressed: ‘The car is not road legal. The fitment of gadgets is subject to final engineering confirmation and country-specific legislation.’

Paul Spires, president of Aston Martin Works where the original and re-born DB5s were built said: ‘To see the first customer car finished, and realise that this is the first new DB5 we have built in more than half a century, really is quite a moment.

‘I’m absolutely certain that the 25 lucky owners who will take delivery of these cars will be thrilled with them. We are making, perhaps, some of the most desirable ‘toys’ ever built.’

He added: ‘Scores of world-class Aston Martin craftsmen and women, technicians, development engineers and designers have been involved in the project.

‘They’ve been working carefully with a suite of handpicked suppliers from across the world and ensuring that each new DB5 matches not only the aspirations of its owner, but also the duty to the brand’s proud 107-year heritage.’

Heritage programme manager Clive Wilson said: ‘We have not, as a business, made a new DB5 for more than 50 years. So to be involved in the building of these cars, which will go on to form part of Aston Martin’s history, is something I’m sure all of us will be telling our grandkids about!’

After all, would you expect 007 to walk? No, you’d expect James Bond to drive.